Just a test to see if I can get a link up to 'My Patch Map' on GoogleMaps.  It's only draft so will be update if it works.

Back at work today, but while lifting strawberry plants from the fields this morning I couldn't help but notice a small flock of gulls in an adjacent field. Spurred on by Simon's Med Gull in Mote Park I decided to check them out - Common Gull, 20 of them looking very upright and 'friendly-faced' just as the books describe. A sortie at lunchtime was quite productive as I located 2 Little Egrets on the Bradbourne steam, only the second time I've seen a pair on the research station site. The three Barnacle Geese were reloacted in the fields around Bradbourne House, amongst a large flock of Greylag and Canada Geese, after wandering over Wouldham way during the Christmas break. The only other thing of note was the the number of Starlings seems to have increased 10-fold over teh last 2 weeks and are visibly making the wires they sit on sag!
Posted by Adam at 22:08 2 comments:

A morning in Mote Park found me frustratingly scanning the lake for the Med Gull, but with babe in arms I had to concede that a day out in the park with the kids should be just that....so we retreated to the playground (where a Pied Wagtail desperately pecked at bits of discarded rusk and crisps while trying to avoid being trodden on, very reminiscent of a corvid trying to feed roadkills on the motoway!).

Trying to maximise on the fine weather I did a short walk along the River Medway from Barming Bridge to Teston Bridge and up to West Farleigh church and back. A Kingfisher showed very well as would be expected along this stretch before taking flight across the railway towards Barnjet Priory where no doubt there is a well-stocked fish pond! A Grey Wagtail busied itself on one of the shallow streams that feeds the river, my first along this stretch for almost 2 years. I scanned across to the owl boxes on the West Farleigh side of the river but there was no sight or sound of any owls. I was suprised to see 2 flocks of Yellowhammer (8 and 5) darting through the riverside hawthorn, again a species I've not sen for a little while. A grand total of 10 Moorhens were seen feeding on windfall apples alongside Fieldfares and Redwings in the 'deserted' orchard. There are good numbers of Moorhen along the river but no Coots...why? Presently a female Sparrowhawk sped across the orchard, hugging the contour of each tree and shrub panicing the thrushes into the air anf the Moorhen's comically running for cover. I had hoped to see some Siskin today, and reckon I must have walked alongside at least 0.5 miles of mature Alder trees today but not seen any. Yet a small, isolated stand in West Farleigh was seen to hold 15 on Christmas Eve-also very noticeable by their abscence have been the Redpolls. Returning home I heard the yaffle of a Green Woodpecker coming from the roof of my house - thinking this strange I looked up to see a Starling performing a perfect rendition of the yaffle! Have all thsoe Green Woodpeckers I've reported based on their call actually been a canny Starling?!
Posted by Adam at 19:39 3 comments: 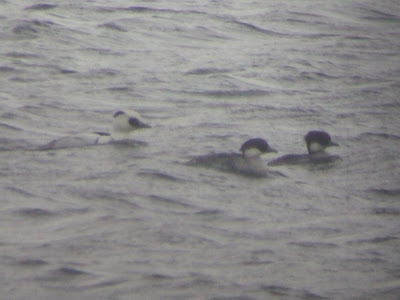 James Bushnell, a fellow birder from West Malling, had texted me earlier in the week suggesting a trip down to Dungeness et environs. My wife realising I had a bad case of Christmas claustrophobia positively encouraged me to go! So a 7am start saw us making our way down to Rye Harbour NR, where the visting Shore Lark dutifully showed itself amongst a flock of 20+ Skylarks. We paused at Scotney GPs en route in the forlon hope of connecting with the reported Long-tailed duck, but if it was there amongst the hundreds of Wigeon we didn't see it. A Marsh Harrier obligingly appeared before we left.

A quick stop at the Long Pits allowed us to have good views of the Red-necked Grebe which appeared more settled than last week and hardly dived at all. On to 'the point' for a spot of seawatching - the wind was strong SW and with no effective shelter, and streaming eyes, we had a brief scan out towards the buoy and 'the patch'. A small flock of Common Scoter flew west, along with a steady stream of Guillemots and a peppering of Gannets. Up to four Red-throated Diver were also fighting a passage west. I'm ashamed to say the wind got the better of me and I failed to check each individual gull on the beach, probably missing Caspain, Med, Little and Glaucous in the process! A single Guillemot was also close in, diving in the surf opposite 'the patch' hide. 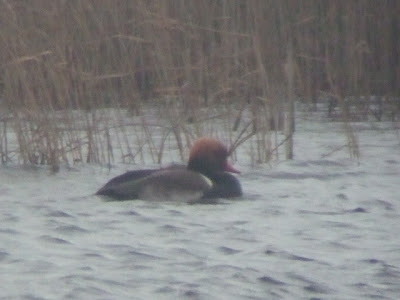 Back to RSPB Dungeness where James found a Black-necked Grebe on the New Excavation Pit 1 adjacent to the Scott Hide. The Smew were present on Burrowes pit although more mobile and distant than of late. Scanning for the Red-crested Pochard we managed to pick out at least 4 Goosander (inc 1 drake) and a female Goldeneye, but after 20 minutes of scanning Cormorants we decided that we weren't that desperate for a Shag (a juvenile was apparently present on the reserve today). The Christmas Dell was as tranquil as ever, until James spotted the Red-creasted Pochard he so desperately wanted and 4 more Smew (1 drake and 3 hens). On the ARC pit we were rewarded with a second Goldeneye, and 2 Redshanks, about the only waders we'd seen on the RSPB site today. With the lack of waders in mind we headed off to Lade Sands but was met with a very distant sea, and equally distant waders, Curlew and Dunlin being the only discernable species. Onto Lade Pits where our second Black-necked Grebe of the day appeared rather lonely and lost in the middle of the pit.

Daylight was fading so a trip across Walland Marsh seemed the best option and it paid off in the form of Whooper Swan with Mutes just ouside Lydd and before Hawthorn Corner and a small flock of Tree Sparrows (the highlight of my day believe it or not!) in a hedgerow just east of Old Cheyne Court. An intended refreshment stop at The Woolpack was thwarted by the pub being closed (quite a common occurence for me at the moment!), so in a desperate attempt to make up the species numbers for the day James checked out the hedgerows, and came up with Long-tailed Tits (which I failed to see or hear) while I scanned across to Walland Marsh and picked out 2 Marsh Harriers and a fantastic male Hen Harrier. With dusk rapidly approaching we made a decision to check out the fields around Brenzett Green/Snave to see if we couldn't pick up the Berwick's Swans I'd seen in the area last week. We were lucky and found 6 Berwick's Swans with 4 Mutes very quickly in a field just north of Brenzett Green church. Confident that was it for the day we were pleasantly suprised to have a Kingfisher dart across the roadside as we packed up the car for the journey back, but it wasn't the last species of the day-that went to a Robin (!) that sat and sang it's rather melancholy song on a fence post by the church. A fantastic day out and without getting to concerned about species count we totted up a respectable 73 species for the day.

I'm back at work on Monday after a very relaxing Christmas break, so I'll be doing less trips out the area and should resume some local patch watching.
Posted by Adam at 22:40 2 comments:

A quick trip into work saw me pick up a couple of species, namely Jay and Little Egret, on the East Malling Research site that had taken me until February in 2007 to spot. Hopefully this will bode well for the 2008 site species count. However I failed to locate the geese flock of geese that have frequented the alke and fields around Bradbourne House, although an email from Ian Sheperd in Wouldham confirmed 3 Barnacle Geese had been on his patch with a flock of Canada Geese, presumably the same flock I'd been seeing in East Malling.
Posted by Adam at 21:26 No comments: 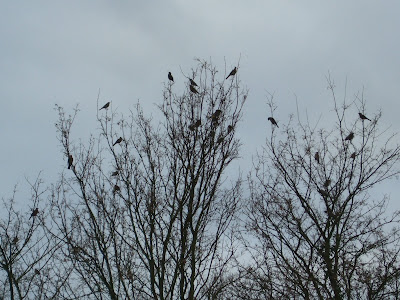 Happy New Year! Unlike many others in Kent, I was confined to the house again today but manged a measely 19 species for the day, mostly from the back window, although I included a Tawny Owl that was heard at 5am...first bird of the year!
Posted by Adam at 21:24 No comments: