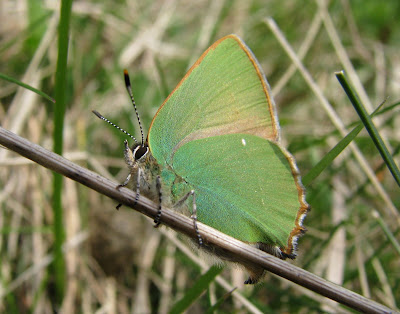 A sunny St George's day with flags adorning more buildings and cars than I've ever noticed before. The cycle in to work from Barming to East Malling didn't turn up anything out of the ordinary. 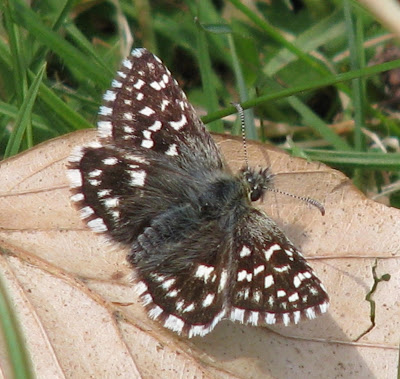 Ross called at lunchtime and we took a trip to Holly Hill, near Birling in the hope of getting a couple of Skipper species. Immediately after leaving the car we were rewarded with Dingy Skipper, quickly followed by Grizzled Skipper. Our two target species within 5 minutes - if only it was always like this! A Green Hairstreak fluttered into view, settling and posed beautifully for within feet of the Grizzled Skipper. More Skippers were seen over the next 30 minutes and although it was difficult to eliminate repeat sightings of the same individuals I reckon we had 8+ Dingy Skipper, 4+ Grizzled Skipper, 1x Green Hairstreak, 2x Brimstone and 1 x Peacock. 2x Common Lizards and 6+ Slow Worms all added to a fantastic lunch hour! 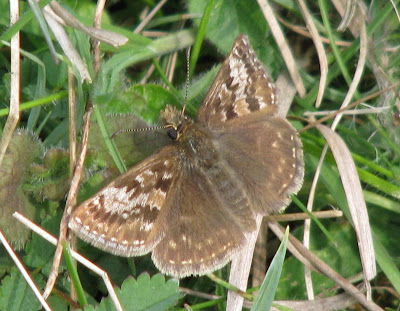 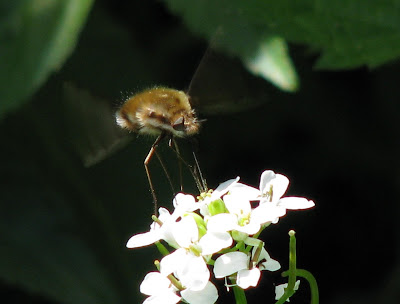 I did a quick sortie around Oaken Wood, Barming this morning before work, hoping to hear a Tree Pipit sing, but none yet. Lots of Chiffchaffs and Willow Warblers, and a Comma and 2x Peacock butterflies on the wing.

On a a very warm lunchtime I almost trod on a basking Grass Snake basking on the cut out steps leading from Kiln Barn Road into Ditton Quarry - my first snake in the quarry. It was sufficiently warm to shoot off very quickly despite my best attempts at photographing it. Butterflies and Bee-flies were the order with Green-veined and Small White, Orange-tip and Peacock, along with 6+ Bee-flies hovering and darting around like Hummingbird Hawkmoths. A Kestrel also spent some time on the ground in the grassy dip.
Posted by Adam at 22:21 2 comments: Another cracking day - warm sunshine and Swallows on the wing (2x Kiln Barn Farm). A low mist hung over at the foot of the downs as I cycled into work by Gallagher's Gallop/Kiln Barn Farm, and apart from the Swallows the only other highlight were 4x Bullfinches. 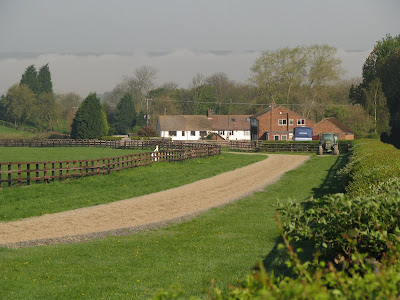 Blossom is dropping everywhere on the East Malling Research Station site at the moment (there's an open day at Hatton Gardens, Bradbourne House this Sunday if anyone wants to check it out). The cherries are the real showstoppers, all blousy, Barbara Cartland, candyfloss-like creations. Which leads nicely on to Ross - we met over Ditton Quarry at lunchtime and both hoped to get some snaps of the the underside of a female Orange-tip butterfly...don't ask why, it just gets competitive like that! Lots of butterflies on the wing, but being so warm little was settling down, so we both failed in our mission. I did manage the underside of a Speckled Wood though! 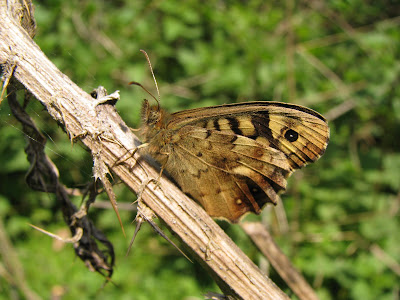 Species seen were: 2x Peacock, 2x Speckled Wood, 6+ Orange-tip, 2x Comma. The liquidy, free-flowing song of Blackcaps flowed from the trees in the SW corner, intermingled with the scratchy warble from the Whitethroats in the brambles. Ross had 2x House Martin overhead. A single Willow Warbler sang from the willows (strangely enough!) near the grassed, dip area. 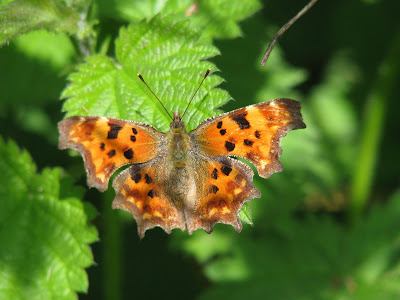 A colony of solitary bees (Red Mason Bees I've been informed) were busy at their colony at the ragstone rock-face. The colony resembles a minitaure Sand Martin colony. 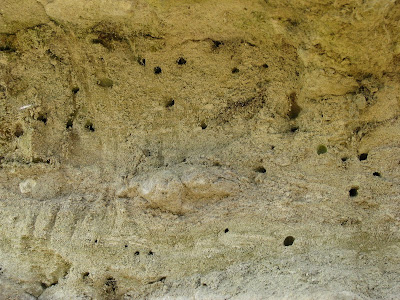 A single Bee-fly prospected around the entrance holes no doubt intend on laying it's eggs that would eventually develop in to the larvae that will parasitise the bees...poor sods.

At home I've noticed a busy Blackbird perching on my fence post with a bill full of worms. I followed him and he led me to a nest tucked away in some ivy right next to the house - with 3 well-developed fledglings, a quick pic and then left them in peace. 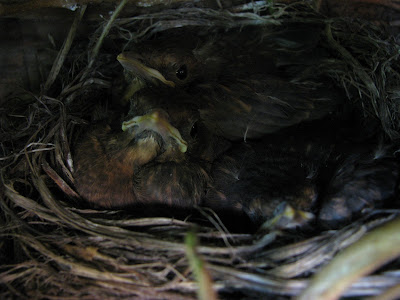 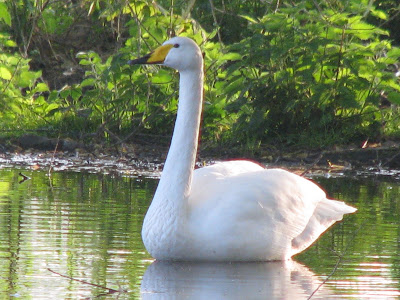 Back to work and how the landscape around the patch had changed in the 2 weeks I'd been away. This really is the time to see Kent at it's best - blossom hanging just about everywhere. I quickly heard my first Willow Warbler for the patch on the east side of Oaken Wood, Barming. Numerous Chiffchaffs and Yellowhammers called and sang. I did a quick scan of the newly coppiced area on the northern perimeter of Oaken Wood hoping for Tree Pipit, but none yet. I was delighted to glimpse 2x Swallows perched on Gallagher's Gallop fence near Kiln Barn Farm. 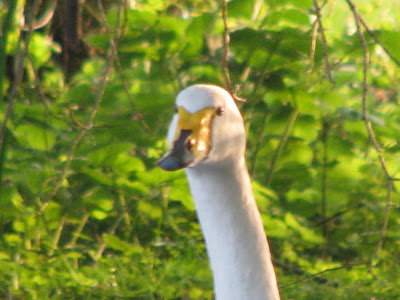 Rather poor record shot (in dying light) of bill markings
for comparison to 'local' Whooper Swans
Over Ditton Quarry at lunchtime, joined by Ross. 2x Speckled Wood, 5 x Peacock, 10+ Orange-tip butterflies were on the wing. A total of 7x Common Lizard were found in 2 locations. Good numbers of Whitethroat scratched out their songs and a Willow Warbler and Blackcap added to the medley. 2x Green Woodpeckers were perched in a tree near the grassy area and a Jay flew across the SW corner.

Later Ross rang to say he'd found a Whooper Swan on Bradbourne Lake, no doubt the one reported late yesterday and early this morning at New Hythe.
Posted by Adam at 22:17 3 comments: 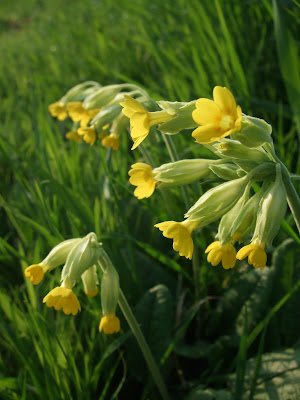 Back in Kent and a brief walk around New Hythe with the kids while my wife wenting shopping at nearby Tescos. Managed 3x Nightingale and 2x Blackcap near Brook House, 2x Slow Worms and 5x Smooth (?) Newts on the East Scrub, 1x Common Buzzard over (thanks Eddie), 2x Whitethroat and 1x Willow Warbler. An Orange-tip butterfly flew across the path through the West Scrub. A fourth Nightingale was heard near entrance to the new housing estate on the east side of the Tesco Lake. 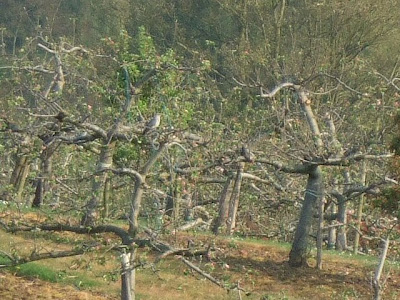 Spot the Cuckoo!
Back in Barming I managed a brief visit to the orchards between South Street and Rectory Lane. 5x Peacock, 1x Speckled Wood and 2x Orange-tip butterflies were seen in the late afternoon sun. A Whitethroat babbled across the railway line near the river and a fine Cuckoo was heard calling, rather croakly, and seen perched and feeding in the apple trees (apparently three birds have been in the valley between East Farleigh and Teston). One of the south-facing banks was smothered in Cowslips.
Posted by Adam at 22:00 No comments: 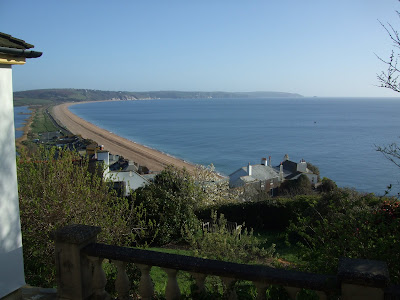 View from the cottage (Slapton Ley just visible on left)
Two weeks welcome break in South Devon, missing all those new arrivals in Kent, but great location picking up a few species rare to Kent. I stayed in Torcross overlooking Start Bay and Slapton Ley and didn't wander more than 10 miles. 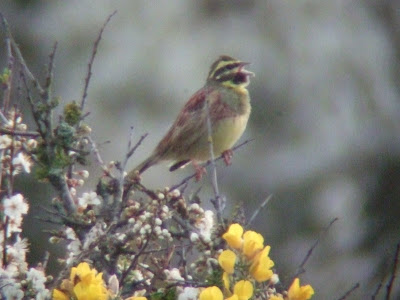 One of many Cirl Buntings holding territory at East Prawle. 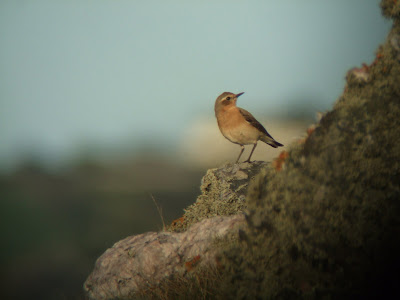 First (and only) Wheatear of the year.
Others: Common seals, Bottle-nosed dolphins (pod of 10 close into Start Point), Adder, Lesser-horseshoe and Pipistrelle Bats (in the grounds of the cottage). 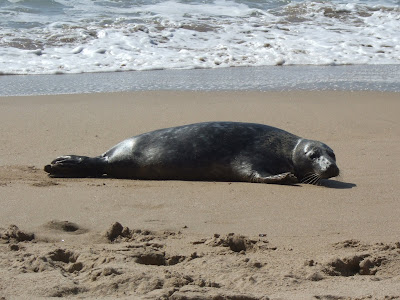